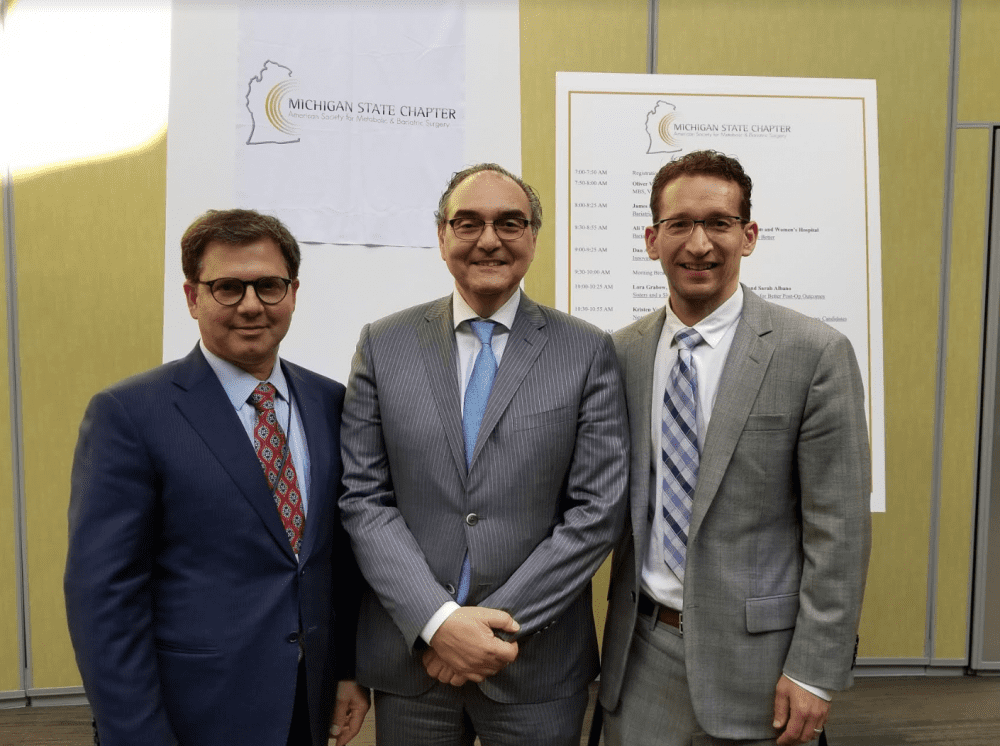 The Michigan State Chapter of the American Society for Metabolic and Bariatric Surgery (ASMBS) held the 11th edition of its annual medical conference on October 4th, 2018 at the Frederik Meijer Gardens and Sculpture Park in Grand Rapids.
The event was planned by the chapter's vice president Dr. Oliver Varban of the University of Michigan Hospitals with assistance from chapter president Dr. David L. Chengelis, of Beaumont Health in Royal Oak and Dr. Mindy Lane, Treasurer, from Sparrow Health in Lansing, Michigan.
Some 200 people were in attendance and included doctors, nurses, psychologists, dietitians, physicians assistants, and other important health care professionals.  In addition, important vendors from the weight loss industry were present.
They were present to hear lectures from experts in weight loss from all over United States.
Dr. Jaime Foote of Spectrum Health, who is a busy bariatric surgeon,  spoke about his own journey this past year as a patient in weight loss surgery.
Dr. Ali Tavakkoli from Harvard Medical School spoke about the science involved in weight loss surgery.
Dr. Dan Azagury from Stanford university spoke about the latest innovations in bariatric surgery.
Lora Grabow, LMSW, of Grand Health Partners presented her expertise in patient support systems.  Her sister, Lora Albano, who had bariatric surgery last year by Dr. David Chengelis, revealed her journey through the process which was very inspiring.
Dr. Kristen Votruba,  PhD from the University of MIchigan presented fascinating work on neuropsychological and psychological functioning in bariatric surgery candidates.
The current president of the chapter's mother organization, the American Society for Metabolic and Bariatric Surgery,  Dr. Samer Mattar, of the Swedish Hospital in Seattle,  honored the meeting by delivering a keynote address which reviewed the current agenda and progress of the ASMBS.
Intuitive robotic surgery sponsored a speaker during lunch,  Dr. Richard DiCicco,  from Florida Surgical Weight Loss Centers,  who reviewed his extensive experience in the successful and safe use of robotic surgery in weight loss.
Karen Flander,  MSN, of Massachusetts General Weight Center  spoke about the implementation of ERAS (enhanced and early recovery) in bariatric surgery.
Dr. Rachel Moore,  a prominent and busy bariatric surgeon who practices in New Orleans spoke about surgery in patients who are currently less heavy that the weights demanded by the insurance industry but are still suffering from obesity.
Dr. Allison Schulman,  a gastroenterologist from the University of Michigan, spoke about the use of endoscopy to deal with issues that may arise after bariatric surgery.
The information was captivating and shows the dedication individual providers,  doctors, surgeons,  psychologists, dieticians, internists, scientists from all over the state, country have for helping those who suffer from morbid obesity.
The meeting was made possible from the generous contribution from leaders in industry who also attended.  GORE, ETHICON, MEDTRONIC were the major contributors.
Representatives from Intuitive Surgical,  Baxter, Metagenics, Novo Nordisk, Stryker, Celebrate, Pronex, Robard, Olympus, Unjury, Standard Bariatrics were also contributors.